How To Prepare a Divorce Settlement Agreement 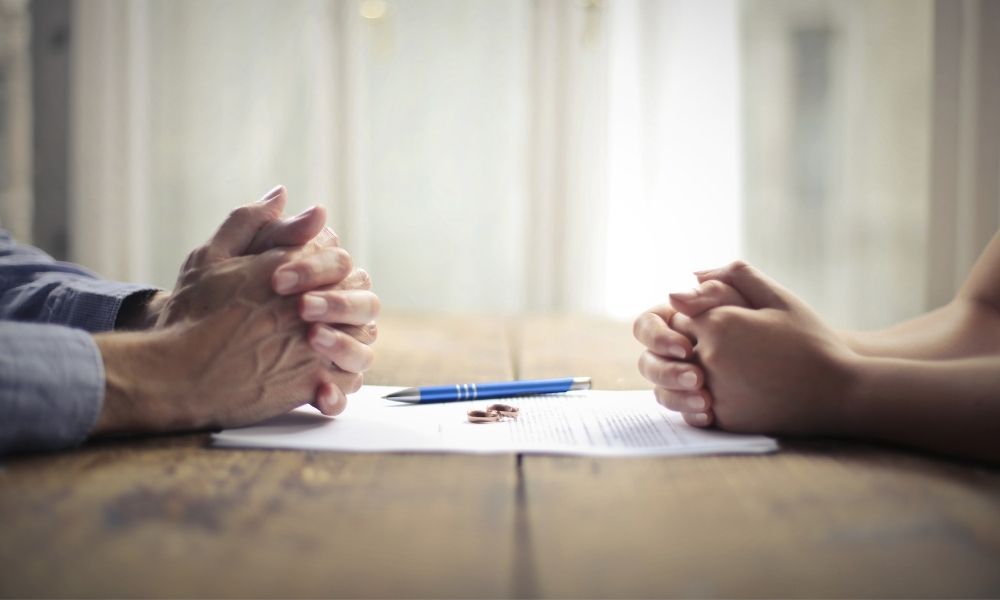 Most jury duty isn’t duty at all. Often, you get called in, watch the instructional video, and go back home having never set foot in a jury box. (Fortunately, the court still pays you for your time.) The reason this happens is that just before trial, attorneys often settle a case “on the courthouse steps,” averting a trial by jury in the eleventh hour.

In divorce court, all parties are just as eager to avoid litigation, which is expensive, painful, and public. Alternative dispute resolutions have allowed divorcing couples to avoid litigation by presenting settlement agreements that they have drafted through negotiation, mediation, or collaboration. Provided that no terms of the agreement are in contravention with the law, the judge will approve this document, bypassing a time-consuming and costly case in divorce court.

More and more divorcing couples are pursuing alternatives to litigation by drafting a clear, equitable, and legal settlement agreement before meeting with a judge. If you and your spouse are at a place where you can work together professionally to determine a fair outcome, knowing how to prepare a divorce settlement agreement will save both of you time, money, and stress. Here’s what you should be sure to include and what to avoid.

Don’t just open a word processor document and start typing away. If you intend to get started on drafting a settlement agreement, you can find templates that will help you organize your information and present it in a format that will be familiar to attorneys and judges. Locating a boilerplate document for your state is easy, and it’s one of the most important time-savers of this process. If you consult with attorneys or a mediator to look over your agreement before submitting it to a judge, a poorly formatted document could have you starting over from square one.

A settlement agreement should begin by putting the basic facts of the marriage into writing. Include the date on your marriage license as well as the date on which you formally separated. If you and your spouse have any children under the age of 18, include their names as well, as they’ll be important to this agreement. Include both of your current addresses in the event that you’ve taken up separate living arrangements after the separation.

Assets To Be Divided

This is the meat and potatoes of a divorce agreement. In this section, a couple will determine which assets and liabilities constitute “marital property” and which belong to individuals. In some states—California and neighboring Wisconsin being the most conspicuous instances—all property a couple acquires during a marriage is considered “community property,” or jointly owned by both spouses, and therefore subject to equal distribution in divorce. In Illinois and most states, the focus is not on equal distribution, but equitable distribution. Illinois also grants notable exceptions to certain forms of property that one spouse acquires during marriage. In addition to properties spouses acquired prior to marriage, such exceptions include certain gifts and bequests, as well as property exchanged for non-marital property. A prenuptial or postnuptial agreement in Illinois can also override marital property guidelines by excluding certain properties.

Determining financial support and visitation rights for children can be one of the most challenging aspects of preparing a divorce agreement on one’s own. Judges are highly unlikely to rubber-stamp a settlement agreement that concerns children. When parents divorce, it is incumbent upon the court to ensure the best possible outcome not for one parent or the other, but rather for the child or children. This can involve child custody hearings in which children who are old enough may be called upon to speak before the judge. A judge may also take issue with agreed-upon sums of child support if the court feels that such payments would be insufficient in accounting for the child’s needs.

Go Over Alimony or Spousal Support

One of the common ways in which divorcing couples equalize their assets in a sustainable manner is through spousal support, or alimony. Couples who have been married for at least a year and who would have a great discrepancy in income and standard of living will likely need to account for the higher-paying spouse making alimony payments. Whereas prenuptial agreements can successfully preempt claims on certain forms of marital property, a prenup cannot disqualify the possibility of alimony payments should the couple separate.

Go Over It, and Go Over It Again

“Legalese” gets a poor reputation for being complicated and difficult to understand. The real goal of legal language is to be comprehensive. Terms that initially seem redundant, such as “null and void,” actually exist to cover all possible bases and leave no ambiguity. The goal of a divorce settlement agreement should be one that is airtight—failing to account for all possibilities in a settlement agreement can open one or both parties to trouble down the road. This is part of why, as convenient as it may seem to have boilerplate documents at the ready, preparing an agreement without professional oversight is dangerous.

When Doing It Yourself Doesn’t Work

Despite your best efforts to streamline the divorce process and make it as cost-effective as possible by preparing your settlement agreement without assistance, such seamless separations are the exception rather than the rule. We have a specialized legal profession for a reason—a reason that reveals itself when two people try to overcome interpersonal strife that they simply cannot overcome. Even if you understand how to prepare a divorce settlement agreement on your own, sometimes, the process goes terminally awry, at which point you’ll need experienced professionals on your side to draft the necessary paperwork to move on with your life. The law firm of Schiller DuCanto & Fleck has been assisting couples in gracefully and professionally divorcing by stepping in to help draft Illinois divorce settlement agreements for couples whose independent negotiations have reached an impasse. Feel free to reach out today for more information or if you have any questions.